9/11 changed us. I mean, duh, you know all the historical stuff like Homeland Security and The Taliban and Bin Laden and The War on Terror and even Freedom Fries but the real change came the day after.

On 9/12 we decided to get back up. If ever there was a time to blame and yell and cower and fear, it was 9/12 but we rose. Emphasis on the word we. No, it was not perfect, life never is but there was a common enemy and we united to deal as best we knew how.

I was in my third year of teaching in a new small town, waking up to my sister in-law calling on the landline, “Turn the TV on now”, I went into work in that small town just because I knew my babies and wife would be safe but my students might not be. We created art, listening to the news on the radio because there were no cell phones, told stories, processed. I still drag out my collage from the day each year on the anniversary. Never forget. 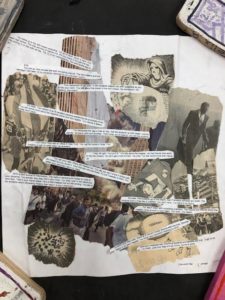 I remember the shock. There’s a thing that sometimes happens when a lesson goes south or I haven’t prepared well enough and I start feeling a little out of control, like when you are asked to give a speech with zero warning. That’s how the day was because, “What the hell is happening and why the hell is it happening and who the hell made it happen!!!” You get my point.

20 years later we know the answers to those questions but have we learned how to stop this from happening again? Did you see who is in charge of Afghanistan? Do you see the suffering around the world? What is the answer? Of course, I have one.

Grit and unity. That’s it, two words which are so easy to write and so difficult to live.

If 9/11 happened today there would have been immediate blaming from both sides of the aisle. The left is too passive with terrorists, the right is too focused on keeping the oil flowing, spin it however you want, the result would be further polarization into our silos.

But we didn’t do that, we got up on 9/12 and said, “how can we make this better?”. How can we work together to make the world safer and build a Freedom tower to remember and honor those who died and move in a safer direction. We worked, we created, we grieved together. Were the results perfect? No, they rarely are but we were unified and we didn’t blame each other. A common enemy united us (COVID is our present challenge with Climate Change on deck).

I’m still in the same small town, same classroom, doing pretty much the same thing only now I fight daily to teach grit and unity because their importance is more essential than ever.

And the real good news is that most of the next generation know this. They’re just waiting for this week’s episode of “Outer Banks” to end and the old rich guys to get out of the way so they can make the necessary changes and get the ship moving in a different direction.

Will they stumble and fall? Of course, that’s life where the journey is the destination but they will also remember that bad times get better and fighting usually helps no one.

Want to have a life changing experience this weekend, head to downtown Napa and feel the power in Gordon Heuther’s 9/11 memorial sculpture. Run your hands over the beams which were once the actual towers. Grieve, think, reflect then move on because that’s all we can do.