My favorite place is on the bottom of pile seven. No real reason except that usually when human gets to the bottom of pile seven he is about to win the game. I guess I like to matter, I mean, I could jump out quickly, first pile, first card, watching human play the entire game waiting for a black queen to move me onto but I hate the waiting anxiety. Plus the two black queens are kinda mean, especially the queen of spades who thinks she’s the queen of the world, and I like to spend as little time atop them as possible.

Mostly, I like the shuffle and the fan and the laying out of the cards wherever human chooses to play. Last week as I was taken out of the Bicycle pack I smelled the most wonderful scent, then as I was flipped over on pile three there were the most amazing trees above me. This is what I saw: 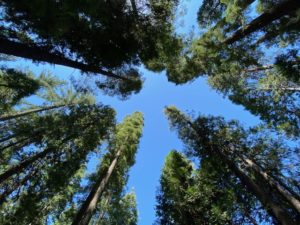 I got dirty and a little sandy by the river in the mountains but the next morning I was flipping around on a hard wooden table with the same wonderful scent all around me and human smiling bigger than I have seen him smile all summer.

Usually I’m at the kitchen table or on the front porch nest where human spends much of his time talking into a little box or flipping pages on a medium sized box or clicking away at a bigger box or just staring out at the world. I like the nest because it’s filled with bird sounds and the weather changes and sometimes human’s dog Sam jumps up and all the cards go flying. Human never gets mad when this happens because Sam is the only other living thing human has most days for a companion. There’s a female human and some other smaller humans but they are rarely around when I come out of the box.

Of course, I’m in charge of whether human wins or loses each game. To win, the cards must go from the initial seven piles to four piles above, each suit from ace to king in ascending order. In the last five months I have let human win with increasing frequency because that’s how normal mastery of a skill works. In reality, the game is totally up to me as I communicate with each card as they are shuffled and placed on the seven piles. Human actually thinks winning means his day will go better so I like to let him win.

Winning promotes confidence but it can also lead to arrogance, which happened early in the summer when I let human win four games in a row. The other humans never heard the end of it and my human stopped playing for days thinking that the four wins meant he had mastered the game, he even tried learning the guitar which lasted only a couple of days.

It was a week before I was let out of the box again. When he came back to playing I made sure he didn’t win for 10 games. Boy was that a hoot, I thought he was going to throw the cards off the porch but he just kept playing. Humans apparently have a lot of time on their hands. I don’t let him win consecutively any more.

Then there are the crazy times when all four humans are playing together at the kitchen table. It’s always a party for us cards because it’s rare that we all get together outside of our boxes. Plus it’s the only time the Jacks can get together and make plans for the future. The Kings and Queens always argue over who is in charge, especially the king of spades who has a real attitude, but the Jacks of hearts know they are calling the shots. The other humans don’t seem to get the same joy out of playing that my human does but after they win a game their mood always changes for the better.

Our secret power was almost found out in 1975 when Bob Dylan recorded “Lily, Rosemary and the Jack of Hearts”. The song almost outed us as the center of the universe but thankfully people didn’t think deeply enough and called it “an intricately evasive allegory about romantic facades”. Dylan is one of the 10 humans who spend their time secretly influencing the world without anyone realizing their true impact.

Luckily, the song never made it big, so it’s power, and the power of the Jack of hearts, remain secret. 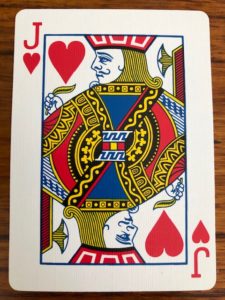