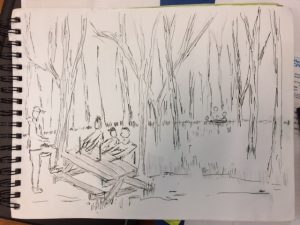 It’s a drizzly Wednesday at the Jack Rabbit picnic area at Spring Lake Park and Ryan is the one kid who is really getting it. I am coordinating Station 6 at the 29th Annual Math Steeplechase, “A fun day for students to show off their math and problem solving skills.” Is how the Sonoma County Mathematics Council explains it. Like the cast of “Big Bang Theory” goes on a nature hike is how I explain it.

I love all fieldtrips and this one especially because it is a collection of the top math students from Sonoma County who walk around 10 stations solving really cool project-based problems. No phones, no screens, teams of strangers who bond as the day goes on. There are a lot of reasons to love this day. It brings education to life, makes it real and tangible and fun. I tell my students their goal for the day is to meet somebody new which is just as important as learning math skills in my book.

Station 6 consists of a coffee can filled with marbles. The top is duct taped shut and there is a small hole in the tape just big enough to see one marble at a time when one turns the coffee can over. The prompt tells students that there are 3 yellow marbles in the can and they have to find out how many black marbles are in the can. Student teams get 100 points if they figure out the exact number, scores go down in increments of 10 the further they get from the correct number. You get 50 just for trying and a 0 if you rip open the duct tape. Ryan’s team got an 80; all the other teams earned 50’s (most guessed 4 or 5 black marbles). Tough problem, can you figure it out?

This is my fifth year at the Math Steeplechase. My Creekside posse are not the top math students from the county but I bring them anyway. It’s voluntary-ish, I entice them with a day in nature, a free T-shirt and lunch but I also cherry pick the students I think will benefit best from the experience. I am sometimes wrong, students have refused to stay with their groups or have spent the day standing next to the van but that also is a learning experience. Life is about participation, walk down every path you can.

When the groups come to Station 6 I ask which high school they’re from, what year in school they are and what their goals and plans are for the future. Most are shy and nerdy but I can usually get them talking. MIT, Stanford, UCLA, these kids aim high and usually make it. I congratulate and encourage them, make small talk, then the air horn goes off and they get to work.

Ryan was a different level from the beginning. “Hi, my name is Ryan from Healdsburg, I like your sketch.” He said with a firm handshake and direct eye contact. I had been drawing a very poor version of the Steeplechase nature scene to keep my ADD in check while the students calculated. Ryan then introduced the rest of his team (he was the only one who did this and was the only one to seemed to know the names of his teammates). When the air horn went off, he delegated responsibilities, didn’t showboat, asked open-ended questions to the group and came up with a hypothesis and method for solving the problem. One person took notes, one person shook the can, one person called out the color of the marble through the small hole and Ryan coordinated. Forget marbles, this group could solve world hunger.

Three yellow marbles materialized in the hole after 41 shakes of the can. In 41 shakes of the can, 10 black marbles had materialized in the hole. Using probability and ratio theories Ryan deduced that there were 10 black marbles in the can. His theory was off by two (there were actually 12 black marbles in the can) but sometimes that’s how theories go. His score was not as important as his technique but the 80 helped his team win the top honors of the day.

At lunch, I went over and congratulated Ryan and his team on being the only ones to figure out a method to find the number of marbles. He was busy talking with his new friends about UCLA (where he’s headed next year) but excused himself from his conversation to tell me that the marble problem was his favorite. He also asked how my sketch had turned out, I showed him and we laughed.

“It was nice meeting you Mr. Williams.” He said authentically.

“Very nice meeting you too Ryan.” I replied.

Elon Musk has an inspiring new TED talk which I just used in my classroom (https://www.ted.com/talks/elon_musk_the_future_we_re_building_and_boring). He ends it by explaining his very simple philosophy, “I just try to think about the future and not be sad.”

Ryan from Healdsburg is my inspiration to not feel sad about the future.