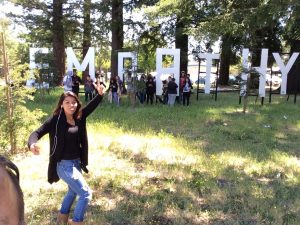 Friday at 1:00 I hit the Meet app button on my phone to end my final virtual office hours. I have already entered grades and independent study credits so I send a final email to my office manager and breathe a big sigh of relief. We graduated 16 at Creekside on Wednesday and SVHS is now in the middle of graduating many more. Doing the best we can with no script and an unprecedented situation.

Friday was also the completion of 20 years working as an educator in the Sonoma Valley Unified School District. 20 years of teaching Art, Biology, Physical Science, Algebra, Geometry, Film, PE, and Independent Study at Creekside. Four years of coaching boys tennis, three coaching girl’s golf at SVHS, two years as principal of the Arts and Ethics academy in Santa Rosa, a summer as middle school principal at Adele, and 145 blogs plus many other tales written for local publications.

But enough humble bragging, this is, sadly, not a time for celebration, or a time for centralization. It is a time to look at the bigger picture and reunite with the solution to all that ails us: Empathy.

And most importantly, there are people in Sonoma without food, sick with a virus we do not yet know how to beat, unable to work, unable to see a doctor, worried about things I can’t even imagine. My main concern today is whether it will be warm enough to go to the beach tomorrow.

But, back to Empathy.

Last Tuesday afternoon I was sitting with my wife by the duck pond watching the protesters on their fourth march around the plaza and the two things which impacted me were the sound of saws cutting plywood to cover windows (really, preparing for looters in Sonoma!?!) and the a-hole repeatedly grabbing his privates and yelling, “Losers!” at the passing protesters. Initially angry, I became sad and thought of Anthony Spivey.

One of my favorite stories I tell students is about the two times I’ve gotten into fights in my life. Both in second grade, one with Shawn Jones who had a hearing aid and talked differently and one with Anthony Spivey who was the only African American kid in lily white Enslen Elementary School in Modesto. They were different; I grew up thinking different was bad so my 8 year-old self did what bigoted 8 year-olds do.

I would love to say I had a miraculous turnaround but that’s not how it happens. It happens through exposure and teaching and empathy and it took me until the punk rock days of high school, discovering The Clash and ska and reggae and making diverse friends before I fully understood the idea that different is actually good. BTW listen to The Clash’s “White Riot” from 1977 to better understand this time in America 2020.

And now am I racist because of the color of my skin and my choice to settle in Sonoma? Course not, I discriminate only on the basis of assholedness meaning that guy yelling at the protesters is not my people but anyone with empathy can be.  I celebrate diversity especially in the classroom where bigotry has no place but learning about bigotry is even more important than it was when I was 8.

Once we do get back in the classroom (I predict/hope for a full Fall return after a vaccine is discovered mid-summer) things will begin moving in the right direction. Trump will lose in November, Biden will focus on unity and young people will reshape America. Simple and how do we do it you ask? Empathy.

I like living in a country where we are free to say what we want. I really like that I have a platform that has never been censored and sometimes actually achieves my goal of making people think. And I really, really like that we are smart enough as a species to know truth from fiction and that the adults seem to be finally reacting to the wheels coming off the bus.

Do you disagree? Fine, log off, write a letter, express your own opinion, these are all good things. Should Twitter be able to put a footnote on untrue tweets, sure. Should Facebook? Sure. Is it a problem that the Zuck disagrees? Not at all, his goal is free speech, which to him means no censorship, plus he might get some financial benefits from not censoring. Empathy.

When Trump says, “I’m a big environmentalist.” like he did last week is it social media’s responsibility to call BS? No, it’s the educated public’s responsibility to know that the actions of the last few years directly contradict that statement. Want to never be upset with bunker boy again? Empathy. If you put yourself in Trump’s shoes, think about what his priorities are, who his friends are, and how he’s made his money, it’s easy to understand what he will do next. Although the bible photo op was pretty astounding even for him.

Things are weird and getting weirder. As I write this on a beautiful Monday at my favorite picnic table in the plaza a 20-something guy is driving around in a black SUV berating strangers for wearing masks. We all hate masks but we are still unsure of whether they are necessary and we want to stop the potential spread so we follow the rules. Empathy.

When one is pathologically optimistic, one looks for silver linings in everything. Both kids have boomeranged home for the summer, which is a mixed bag for all involved, but one of the joys is the return of the posse. My daughter has a wonderful, supportive and sometimes way too loud group of girlfriends who are now old enough to discuss how they are going to change the world. Guess which one word solution I suggested?

Are you searching for meaning in these times of extreme bad craziness? Wondering how to fix or change or shift or evolve our society even though you are only one person stuck inside frustrated by powerlessness. Try understanding and sharing the feelings of others.

Want to stop racism and sexism and anti-gayism and all the other isms then put yourself in other people’s shoes. Want to understand BLM, then understand the ugly history of black lives in America.  And no there are no perfect solutions only ideas that move us in the right direction. Our society has done and is continuing to do some ugly things but through crisis comes growth and hopefully we will learn like I did with Anthony.