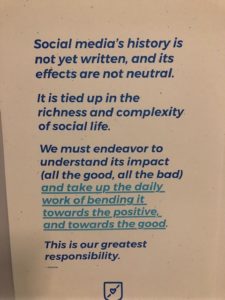 I’m out of business cards so the kids and I are going by my classroom before we head to Menlo Park, I’ll need plenty of cards because in my mind I will be sitting down with Mark Zuckerberg and his cronies, pitching my new educational environment which he will be super stoked about, immediately committing the necessary funding.

We stop to gas up at Jack’s, Sonoma’s newest and coolest place to buy beer or wine or cool magic tricks or vinyl albums. Apparently they can sell all these things but not coffee because of city rules, I make a note to send an inquiry to Amy Harrrington and Rachel Hundley on why this makes sense. Be bold.

We drive south, me happy to have a day with my 19 and 21 year-olds home on Thanksgiving break. They are both in that unsettled stage of life when you can do anything but you know how to do nothing and I’m hoping the trip will spark some direction. I’m not a helicopter or snowplow but a submarine parent, secretly monitoring what’s going on while the kids figure out their paths.

We arrive at MPK 20 then head to Lobby 4. There are two giant facilities split by a freeway, Lobby 4 is in the new building and has a wall of windows, a few couches and a giant two story art piece painted on the wall. All the art is meant to bring people together, I learn later.  We register and receive our official badges then wait for my brother in law to come pick us up. Security is tight but not oppressive.

I won the brother in law lottery. Richie is not only super cool, bursting with empathy and creativity, winner of multiple Grammys and in possession the best laugh on the planet, he is in charge of mixing and mastering music at Facebook. I had been trying to find a time to have lunch and the Thanksgiving holiday was perfect.

We greet and he immediately makes fun of my sport coat. I’m a bit of a peacock and I knew Mark was more likely to notice me if I was looking sharp. Richie is rocking the social media worker uniform: Expensive running shoes, jeans, t-shirt and either zip front hoodie or black Patagonia puffy jacket. He explains that we need to be within 10 feet of him at all times and that we have to be very careful not to take any pictures of the many whiteboards. Obviously, secrecy is a thing.

We head upstairs past a second check-in and I’m shocked to see the giant warehouse with exposed beams, individual meeting rooms, multiple sections based on responsibilities and no one sitting behind their desks. People are walking around, smiling as we pass, talking, arguing, and using lots of hand movements.

We pass by Richie’s workstation, which he says he hasn’t sat in in months then head to the roof that is really a giant park. There’s a group talking around a fire pit and a smoothie bar where I have a shot of wheatgrass and Richie grabs some ginger concoction. We pass a big lawn where a woman is setting up a yoga class. He shows us the temporary employee housing, employee services (dental, barber shop, car rental, gym, laundry service, tons of free food) and many more art projects.

Richie points out the lair of the Zuck, adding that Mark had cancelled a meeting he had with Richie because he was going to be out of town for the week. Damn, my plans for changing education are dashed again. Maybe it’s time to rethink my funding strategy.

We head to lunch through a tunnel between the two 8 acre facilities. 20,000 employees work here which seems kinda high but it is the Tuesday before Thanksgiving and many are not on site. We walk down the Frank Gehry designed street (no wonder it kinda resembles Disneyland), past the candy shop, past a giant movie screen and stop at an outdoor Ping-Pong table. Richie and I hit a few balls while the kids gawk at all there is to see. 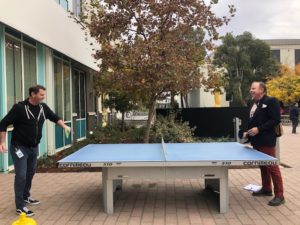 My son and I grab burgers feeling dangerous while Richie takes my daughter over to get Pizza (breaking the 10 foot proximity rule) then we sit and people watch. Diversity is the word that best explains the Facebook employees. Asian, Indian, Latino, African, white, black, brown, no race is dominant and the genders seem about equally split. It’s like a mirror of America. Real America where we celebrate diversity and include all people.

I ask how people get hired and what happens if someone isn’t pulling their weight. Richie suggests being young and bold and not afraid of mistakes. Plus since the hiring and training process is so extensive it’s rare that people are fired. Facebook’s five core values are Be Bold, Focus on Impact, Move Fast, Be Open, and Build Social Value. As the Zuck says, “I will only hire someone to work directly for me if I would work for that person.” Course it helps to be a rock star coder or owner of a few Grammys like Richie.

After lunch we head back under the tunnel, I continue to write “KING FACEBOOK” with a crown (something about the place triggered my inner Basquait) on all the chalkboards we pass. I take a picture of the social media poster above, hope that the sentiment is true.

We checkout and drive over the Dumbarton Bridge which Facebook is soon going to spend a billion dollars upgrading with rail service. We reach Richie’s new office and my son is getting tired. He hits up one of the many free beverage refrigerators and selects a Fire flavored Smart Water. Even the beverages are edgy. We get new credentials but have to wait for Richie before entering. He pulls up in his smart car and I feel like I’ve entered the future.

The recording facility is incredible, mixing rooms with $100,000. speakers, a Foley studio for sound effects, individual offices with mixing boards and wall sized computer screens. We are in one of the many mixing rooms talking to CL who is babysitting us while Richie begrudgingly gets a promotional photo shoot done. CL is talking about what he is working on: Mixing a new rapper from Atlanta plus creating background sounds for the new Oculus system. Few details but we have learned to ask general questions because, well, secrecy.

Richie brought CL with him from Nashville, he’s 20 something, homeschooled, and very interested in how my kids stream and listen to music. Not fake-being-polite-to-my-bosses-relatives-interested but asking real questions, I get the feeling CL is always learning. He explains how awesome the Blackbird Academy in Nashville was in helping him learn about mixing but also how incredible Facebook and Richie have been.

He also explaines that he worked about 80 hours last week but that it was not really work because, well, you know, love what you do and you will never work again   (one of his jobs was recording Guns and Roses-yes they are still around).

Richie walks us out, the lunch has lasted almost 4 hours and the inspiration goal has definitely been reached. The drive back to Sonoma is lively.

Facebook is not the enemy. However when you are allowing all things onto your platform, there will be conflict and problems. Try getting a billion and a half people to agree on anything, it’s just not possible. It is not a perfect place or platform but it is a pretty amazing model.  The best thing about it is if you don’t like it, you are in control. Log off; grab a Frisbee, head to the park.

We can yell and fight and sue and scream about losing anonymity and impacting elections and creating a generation obsessed with likes and Instagram pics or we can understand the impact and bend it towards the good.

Remember all this is all only 15 years old and started with a single idea. Where it will go in the next 15 is the real question. 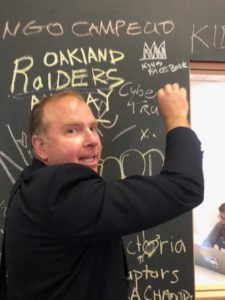